Sol LeWitt maintained that the idea itself was art; the concept trumped the object. For this reason, he is considered one of the pioneers of what became known as Conceptual Art. LeWitt is often likened to a musical composer. in the same way that a composer writes a score that is then interpreted by other musicians, LeWitt creates instructions that are then interpreted and executed by other trained artists. These people are called “draftsmen” and “draftswomen”; to “draft” something is to draw for a particular purpose.

With his wall drawings, LeWitt sought to prioritize the idea over any other element of the art piece. He composed directions that could be executed by the artist himself, or trained drafters. Early in his career, instead of creating the drawings himself, LeWitt employed draftspeople to execute the work. The directions often called for basic lines in four directions: vertical, horizontal, diagonal left, and diagonal right. These lines would stand alone or be “superimposed,”or layered, on top of one another. Later he expanded his vocabulary to include concepts such as straight and not straight, even and uneven, touching and not touching, random and ordered, arcs and circles, and triangles and squares.

These delineations and directions often appear in the subtitles of each drawing, and act to establish the idea and direct the draftspeople. LeWitt’s work exists as certificates that accompany the titles and directions. They are the blueprints—it is only as they are read, understood and implemented by the draftspeople that they become wall drawings.

Sol LeWitt was one of the most eminent of the conceptualist artists who came to the fore in the 1960s. He is known for his deceptively simple geometric sculptures and drawings and ecstatically colored and jazzy wall paintings. Sol LeWitt was born in Hartford, Connecticut, the son of Russian immigrants; his father was a doctor, his mother a nurse. He studied art at Syracuse University, New York, and was drafted into the forces in 1951 to serve in Korea in the Special Services, an organization that covered peaceable operations such as entertaining the troops and, in LeWitt’s case, designing posters. Following Korea, he worked as a graphic designer for Seventeen magazine in New York and then in the office of the architect IM Pei.

He found his vocation while he was working in the bookshop of the Museum of Modern Art, where other employees included a number of aspiring artists. LeWitt was inspired by the work of the Russian constructivists, men and women who believed in a utilitarian art for an industrialized age. Art critic Michael Kimmelman wrote that LeWitt “reduced art to a few of the most basic shapes (quadrilaterals, spheres, triangles), colors (red, yellow, blue, black) and types of lines, and organized them by guidelines he felt in the end free to bend. Much of what he devised came down to specific ideas or instructions: a thought you were meant to contemplate, or plans for drawings or actions that could be carried out by you, or not. Sometimes these plans derived from a logical system, like a game; sometimes they defied logic so that the results could not be foreseen, with instructions intentionally vague to allow for interpretation. Characteristically, he would then credit assistants or others with the results.

With his wall drawing, mural-sized works that sometimes took teams of people weeks to execute, he might decide whether a line for which he had given the instruction “not straight” was sufficiently irregular without becoming wavy (and like many more traditional artists, he became more concerned in later years that his works look just the way he wished). But he always gave his team wiggle room, believing that the input of others — their joy, boredom, frustration or whatever — remained part of the art.” The San Francisco Museum of Modern Art organized a LeWitt retrospective in 1990, which travelled on to the Museum of Contemporary Art in Chicago and the Whitney Museum of American Art in New York. 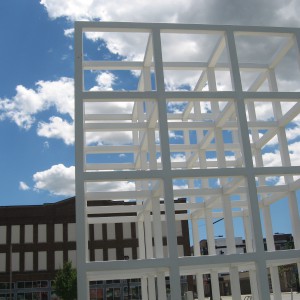 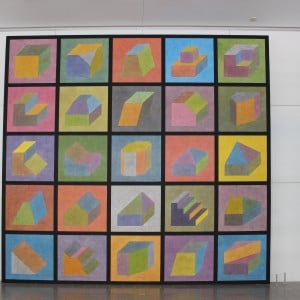 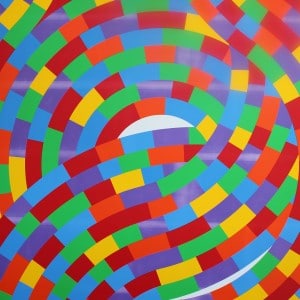