Siah Armajani, an Iranian-born American sculptor, is known for using architectural language and imagery in his conceptual practice. In 1960 he moved to St. Paul, Minnesota to attend college. At Macalester College in St. Paul, Armajani studied mathematics and philosophy (primarily the American transcendentalist Ralph Waldo Emerson) — courses that instilled in him a profound respect for history, democracy and a populist belief in the responsibility of individual actions in the public realm. His experiences at this liberal arts college would later become the central concerns of his artistic practice: internationalism, multiculturalism, and service to society.

While completing his education, Armajani rented a studio in downtown Minneapolis. In his off hours he taught himself to paint, producing works of astounding power and lyricism.

Turning to America’s vernacular architectural forms such as log cabins, barns, covered bridges, schoolhouses, and Quaker reading rooms, Armajani took his work out of the studio, the gallery, and the museum, and introduced it to the world. Numerous commissions led him to create pragmatic structures out of wood and metal, including bridges, houses, reading rooms, and various other dwellings (both ephemeral and permanent) as well as free-standing sculpture.

A 2010 McKnight Foundation Distinguished Artist, Armajani’s previous artwork includes the Olympic Torch at the 1996 Summer Olympics in Atlanta, Georgia, US, and public art installations in the New York Staten Island tower and bridge, the Irene Hixson Whitney Bridge at the Walker Art Center, Minneapolis, MN, US, a round gazebo in Nice, France, and public gardens from coast to coast.

Siah Armajani was an artist and exploratory thinker who delved into architectural imagery, including revitalized bridges and poetic farm buildings.

Read more about the artist.

In this interview by Art Asia Pacific magazine, Armajani discussed the philosophy that drives his public art, the legacy of the conceptual art, and recapitulated six decades of artistic output, highlighting creations that are meaningful to the artist himself. 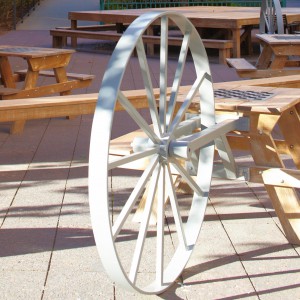