During the course of a relatively short career, Scott Burton created extraordinary works of art that blur the boundaries between sculpture and furniture. Known for meticulously crafted objects made of stone, metal, and concrete, Burton consistently demonstrated a profound awareness of aesthetics and utility, and above all, a desire to engage social space.Burton began his artistic career at the Washington D.C. Workshop of the Arts in the mid-1950s, before progressing to the Hans Hofmann School of Fine Arts in Provincetown, Massachusetts.

Between 1959 and 1962 Burton took classes at Goddard College in Plainfield, Vermont, George Washington University in Washington, D.C., Harvard University, and Columbia University, where he finally received his Bachelor’s Degree. In 1963 Burton was awarded a Master of Fine Arts degree from New York University in New York City.Burton’s deep interest in social exchange began with his first artworks: performances in front of an audience. His sculpture developed out of the furniture he used as props in these performances, and always remains part furniture, undermining the common notion that art is somehow separate from everyday life.

In 1970, Burton began experimenting in furniture-based work while a guest lecturer at the University of Iowa. Burton participated in a two evening assembly of performances and installation art, Two Evenings. On the first evening he staged a performance, “Ten Tableaux: Theater as Sculpture,” and on the second evening exhibited the outdoor installation work, “Furniture/Landscape.” This was his first use of furniture. Burton’s vocabulary of reductive, geometric forms that are often related to Minimalist sculpture of the 1960s. His nearly utopian vision of the role of the applied arts in the service of social transformation was inspired less by Minimalism than by a variety of other precedents in the history of 20th-century design, most specifically Russian Constructivism, German Bauhaus, and Dutch De Stijl. 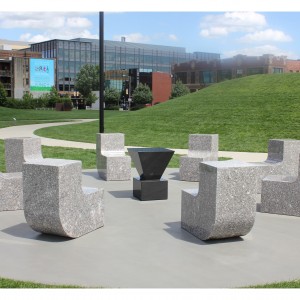