Robert Indiana was an American Pop artist whose work drew inspiration from signs, billboards, and commercial logos. Indiana defined himself as a “sign painter” because of his preference for iconic images of numbers and letters, often taken from the American signs around him. He became a prominent member of the Pop Art movement.

Born Robert Earl Clark on September 13, 1928 in New Castle, IN, he adopted the name of his home state after serving in the US military. Indiana went on to receive his BFA from the School of the Art Institute of Chicago in 1954. Following the advice of his friend Ellsworth Kelly, the artist relocated to New York, setting up a studio in the Coenties Slip neighborhood of Lower Manhattan. It was here that Indiana became acquainted with a number of prominent artists, including Agnes Martin, Jack Youngerman, and James Rosenquist. Over the following decades his work became increasingly popular, with both his LOVE and HOPE motifs transformed into a number of public sculptures. In September 2013, the Whitney Museum of American Art opened “Robert Indiana: Beyond LOVE,” the artist’s first retrospective in New York.

“Indiana’s famous image features the word L-O-V-E rendered in colorful capital letters, with the first two letters stacked on top of the other two, and the letter “O” tilted as if it were being swept off its feet. Since he designed the earliest versions, in the 1960s, the logo has acquired a life of its own, appearing on everything from posters and album covers to T-shirts and jewelry”, wrote Jori Finkel in the artist’s The New York Times Obituary. “Mr. Indiana called it the 20th century’s “most plagiarized work of art,” and he kept a collection of knockoffs in his home, a historic Victorian building, to prove it.” 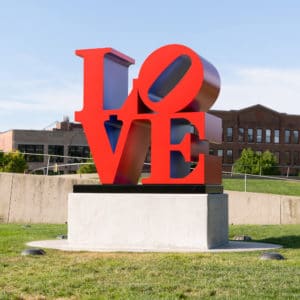