Craig holds an M.F.A. from Florida State University-Tallahassee (1988), and a B.A. from Eastern Illinois University-Charleston (1986). Through both municipal sponsorship and private commissions, his large-scale sculptures have been exhibited in museums, universities, and sculpture parks nationally. His work is in numerous collections including HarborArts, East Boston, Massachusetts; the City of Sioux City, Iowa; the Hearst Center for the Arts, Cedar Falls, Iowa; the Nautilus Foundation, Tallahassee, Florida; and Dordt College, Sioux Center, Iowa.

Craig’s work points both inward to the inherent qualities of metal and outward to the constructed environment and to the history of the industrial age. The processes involved in the shaping and fabrication of metal informs his art making. Integral to his most recent work is the collecting of a range of objects designed for industrial and domestic use. Each particular artifact leads to deeper research, discovery and understanding. He is drawn both to common and to obscure objects from a modernist appreciation of form.

His interest is sustained by the awareness that these objects were designed for hand use and artifacts of a time when technology was still largely dependent on manual processes. The objects’ shape, part-to-part functional relationship, age and wear become points of interpretation and abstraction. The artist further considers the objects’ form, function and history through drawing and model building: these activities refine his sculptural ideas and help define the specific range of associations and representations the sculpture will elicit. Color is a critical element and the colors are chosen to be as suggestive as the structure itself. 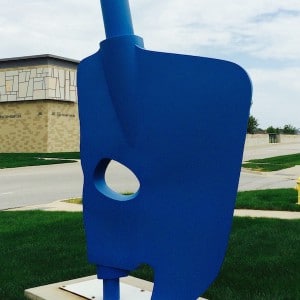 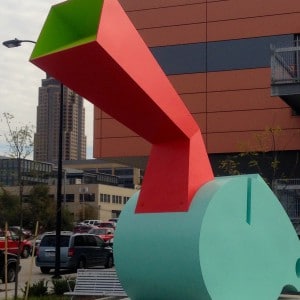