Peter Marasco was born in 1931 in a village called Soveria Mannelli, located in southern Italy’s Calabria region. In the 1950’s, Marasco’s father initiated the family’s immigration to Iowa, where Peter’s siblings had already settled with their families. Peter immigrated to the United States in 1956 and was drafted into U. S. Army and served in Germany from 1957-59. Upon returning to Iowa, he studied art at Drake University. He worked briefly in California, then settled in Des Moines and he taught art in Merrill Junior High, Callanan Middle School, and Central Campus. After a dedicated 32-year career teaching art and commercial art in the Des Moines Public Schools, he retired in 1997. Marasco has been commissioned to create numerous large-scale sculptures for public collections in Greater Des Moines.

Inspired by strong connections to his native Italy and Italian culture, Peter Masaco served as Secretary in the Societa Stemma D’Italia (founded in 1898, Des Moines, Iowa), now called the Society of Italian-Americans, Italian American Cultural Center of Iowa. In 2004, the artist helped Greater Des Moines find a Sister City in southern Italy by developing a relationship with the President of the Province of Catanzaro, Dr. Giovanni Paola. In 2006, Peter and his wife Anna were both honored in the formalization of the Sister City relationship. Currently, the artist lives in Clive, IA.

In 2016, an 8,000 pound,  18- foot tall steel sculpture named “Radiance” was installed at the intersection of Northwest 128th Street and Woodlands Parkway in Clive, Iowa. The artist Peter Marasco said, “I feel so honored and so humbled, there are almost tears coming out of my eyes.” His wife, Anna, commented, “We feel very fortunate as we immigrants from Italy and from Latvia have been able to have such a wonderful life here and leave something of ourselves here. It`s truly a blessing,” she says. Clive assistant city manager, Matt McQuillen says the artwork is critical to preserving the city’s history, “It was important for us to both recognized their historical home for them and the other history of the area. So this is symbol for both of those things.” However the creative works of Marasco is slowing down. In 2009, the 84–year–old was diagnosed with Alzheimer’s disease. Marasco’s wife of 50 years says, “Pete no longer feels a strong desire to get out there and do another sculpture or another creation.” The project took nearly three years to complete and was primarily funded by private donors, art organizations and both city and county entities. (1) 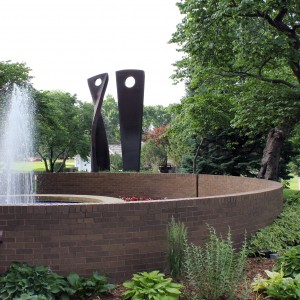