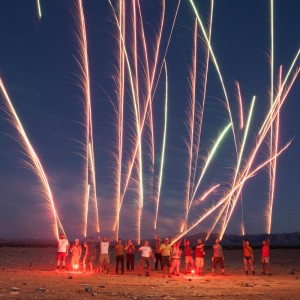 Dan Attoe (American, born 1975) is a painter, sculptor, bullfighter and founder of art group Paintallica. He is represented by Peres Projects in LA and Berlin. Attoe was born in Bremerton, Washington and moved through Idaho, Wisconsin, Minnesota and Iowa before choosing his current location near Portland, Oregon. Attoe attended the University of Wisconsin-Madison where he first studied psychology, and later art. He earned his first and final Bachelor degree credits at the University of Wisconsin-Marathon County before earning his M.F.A. at the University of Iowa in Iowa City. Attoe’s paintings often consist of tiny scenes dwarfed by vast landscapes of dense forests, expansive prairies, and mountainous terrains. His work often touches on the grittier parts of both rural and urban life colored with a mystical form of existentialism.

Jesse Albrecht grew up in a small Wisconsin town and studied ceramics at the University of Wisconsin at Eau Claire. After completing his B.S. degree in 2000, he moved to Iowa City, Iowa, to pursue my MFA in ceramics at the University of Iowa. In 2003, he was deployed to Iraq as an emergency medicine Non Commissioned Officer. After serving in the military, he returned to graduate school allowed art to capture the overwhelming cultural, mental, and physical experience of Iraq. Albrecht earned his MFA (2006) from the University of Iowa and joined Paintallica that same year. His work has been exhibited throughout the US and in Australia. He was adjunct professor at Montana State University and currently lives in Bozeman, Montana.

Gordon Barnes earned his MFA (2007) from Portland State University in Contemporary Art Practice. He has presented a conceptually diverse array of drawings, prints, sculptures, installations, photographs, collages, performances, and various combinations of the above in cities including Los Angeles, Chicago, Portland, and Melbourne. He employs a variable and experimental approach to his practice with his time divided between collaborative projects (most notably as a core member of Paintallica) and solo endeavors. In addition to facilitating the development of a broad range of technical skills, this flexible approach helps him stay in a fresh and open space in which his true interests are able to percolate through his work in a natural way.

Jamie Boling studied at the University of Iowa where he earned his MFA (2004) in Painting and Sculpture. HE makes work that captures and catalogues both penetrating and fugitive moments of my cultural experience. He is guided by the belief that the sensational can sometimes provide profound insights into human nature that lie beyond surface provocation. Boling’s an American daydream that embraces humor and often reveals dystopian visions of a media-saturated culture. Current events, images culled from the internet, publications, and other sources of cultural entertainment dominate my interests. His process of collecting, isolating, recontextualizing, and juxtaposing this imagery creates new meaning through modest acts of translation, synthesis, and representation.

Joshua “Josh” Doster earned his MA Painting and Drawing from the University of Iowa. His visual practice walks a fine line between painting and printmaking. Doster creates formal series that use reproductive processes to create skeletal structures of repeated forms. Printmaking serves as a way to create repeated complex forms as a starting point. Instead of gesso, he use silkscreen or wood block or even hand-executed reproductive means. It is at this point each piece takes on its own unique form and direction.

Jay Schmidt earned a BFA from the Kansas City Art Institute in 1974 and completed his MFA at the University of California, Davis two years later. In 2007 he retired from a twenty-four year career as a professor in the School of Art at Montana State University. His enormous paintings engulf the viewer—one is swaddled in colors, bombarded with madness, with the obsessiveness of modern-day consumerism, commercialism, and war-mongering—all spiraling beyond sanity like a tornado of society. It is this kind of experience, this topsy-turvy urgency, that gets beneath your skin and drains the breath from your body.

Jeremy Tinder is an artist living and working in Chicago. He is a cartoonist, painter, toy designer, illustrator, and teacher. Jeremy teaches classes in comics and illustration at The School of the Art Institute of Chicago, Marwen Foundation, The Evanston Art Center and the Hyde Park Art Center. 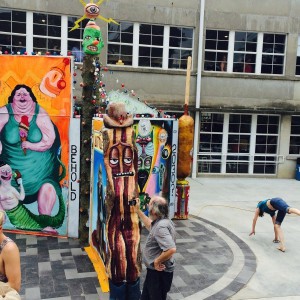