Born in Dover, Delaware, Michael D. Pavlovsky began his lifelong pursuit as a student of painting and sculpture under Patrick Carter. Having earned a Bachelor of Science degree in Landscape Architecture from Texas A & M University in 1982, he was awarded a Master of Fine Arts degree from the University of North Texas in 1990. His work has been included in over ninety juried and invitational exhibitions.

His most notable work was a commission to create a sculpture to serve as the central metaphor for the National Civil Rights Museum in Memphis, Tennessee. “Movement to Overcome” was in place for the opening of that museum in 1991, constructed on the site of the Lorraine Motel, site of Martin Luther King, Jr.’s assassination.

In 2010, he completed a Fort Worth Public Art commission for C.P. Hadley Park in Fort Worth, TX, as well as an additional commission for the City of Fort Worth to design permanent metal light pole banners and crosswalk designs for its Near Eastside Urban Village project.

His work has received numerous awards throughout the U.S. and Japan. 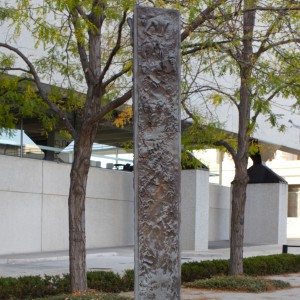