Louise Joséphine Bourgeois; 25 December 1911 – 31 May 2010), was a renowned French-American artist and sculptor, best known for her contributions to both modern and contemporary art, and for her spider structures, titled “Maman,” which resulted in her being nicknamed the Spiderwoman. She is recognized today as the founder of confessional art. Louise Bourgeois studied art at various schools there, including the Ecole du Louvre, Académie des Beaux-Arts, Académie Julian, and Atelier Fernand Léger.

In 1938, she emigrated to the United States and continued her studies at the Art Students League in New York. Though her beginnings were as an engraver and painter, by the 1940s she had turned her attention to sculptural work, for which she is now recognized as a twentieth-century leader. Greatly influenced by the influx of European Surrealist artists who immigrated to the United States after World War II, Bourgeois’s early sculpture was composed of groupings of abstract and organic shapes, often carved from wood. By the 1960s she began to execute her work in rubber, bronze, and stone, and the pieces themselves became larger, more referential to what has become the dominant theme of her work—her childhood.

She has famously stated “My childhood has never lost its magic, it has never lost its mystery, and it has never lost its drama.” Deeply symbolic, her work uses her relationship with her parents and the role sexuality played in her early family life as a vocabulary in which to understand and remake that history. The anthropomorphic shapes her pieces take—the female and male bodies are continually referenced and remade—are charged with sexuality and innocence and the interplay between the two. Bourgeois’s work is in the collections of most major museums around the world. She lived in New York, where she passed away in May 2010. 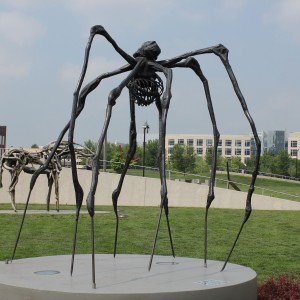