Gerhardt’s early career was as a machinist working for various foundries and machine tool companies. In 1881 Gerhardt married Harriet Josephine Gloyd, know as “Hattie.” When not working, Gerhardt would purse his hobby of sculpting often using Hattie as his model. Living near the Gerhardt’s, was famed author Samuel Clemens. One day Hattie would pay an unscheduled visit to the Clemen’s home. She insisted that Clemens visit their home to view a recently completed sculpture. Several days later Clemens would visit the Gerhardt’s home where he would view the recently completed nude clay portrait of Hattie. Clemens would later write of his surprise at “this girl’s innocence and purity, exhibiting her naked self.” Clemens financed Gerhardt’s education as a sculptor.Moving to Paris, Gerhardt would spend 5 years in training at the prestigious Ecole des Beaux-Arts.

One of Gerhardt’s first major commissions was a bust of “Mark Twain” and when photographed would be used as a front piece for The Adventures of Huckleberry Finn. Gerhardt was honored to create the death mask of General U. S. Grant. Upon the death of Grant in June of 1886, Gerhardt was summoned into the room where the body of Grant laid. In true Victorian tradition, a plaster mask of the face of the deceased General was rendered. Following the creation of the mask, Gerhardt indicated he had no contract with the Grant’s and kept the mask. After a lengthy scandal, his old friend Samual Clemens, intervened and the mask was returned to the Grants. Poor press from the Grant scandal, and poor buisness investments would contribute to Gerhard’s downfall. Beginning in the 1890s,

Gerhardt’s popularity as an artist began to dwindle. His wife Hattie died in 1897 and he never married again.. His name is listed in 1908 in a New Orleans public directory and his occupation is listed as a bartender. He is buried in Blanchard, Louisiana. Engraved on his headstone is “Renowned Artist, Special Friend of Mark Twain.” 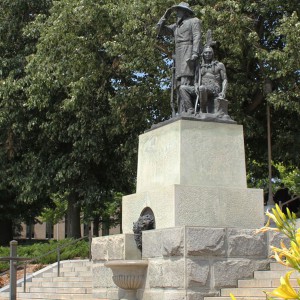