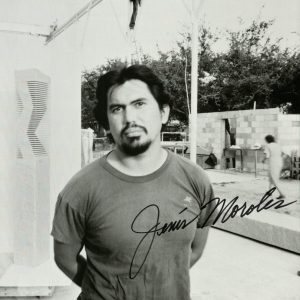 Jesús Bautista Moroles, known for his abstract granite works, was born in Corpus Christi, Texas, in 1950 and raised in a west Dallas barrio. He dies in Texas at age 64 on June 15, 2015; he lived and worked in Rockport, Texas, where his studio and workshop were based. After receiving his BFA from the University of North Texas, Denton, in 1978, he spent a year in Pietrasanta, Italy, apprenticing under the figurative sculptor Luis Jimenez. Critical recognition came quickly and included awards from the Colorado Chapter of Landscape Architects (Vail Sculpture Plaza, 1999) and the American Institute of Architects (New Mexico Veterans Memorial, 1998), among many others. Moroles participated in international sculpture symposiums in China, India, and the United States.

His work was shown in more than 100 one-person and 175 group exhibitions worldwide and included in the landmark exhibition, “Contemporary Hispanic Art in the United States.” Moroles’ most visible public sculpture is “Lapstrake,” a 22 ft tall, 64-ton work commissioned by E. F. Hutton in 1987 and located across from the Modern Museum of Art at the CBS Plaza in New York City. He served on the Visual Arts Advisory Board at the University of North Texas in Denton, Texas, and the Board of Commissioners of the National Museum of American Art, Smithsonian Institution, Washington, DC.

Moroles once characterized his work as “a discussion of how man exists in nature and touches nature and uses nature. Each of my pieces has about 50 percent of its surfaces untouched and raw — those are parts of the stone that were torn. The rest of the work is smoothed and polished. The effect, which I want people to not only look at but touch, is a harmonious coexistence of the two.”

Moroles’ signature pieces include the 2005 Gateway Stele at Lubben Plaza in Dallas and his 1987 piece Lapstrake, which sits in CBS Plaza in New York City, across from the Museum of Modern Art. 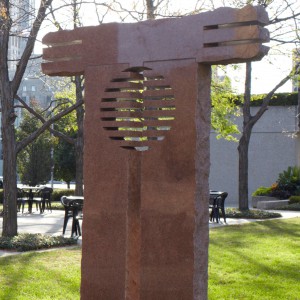