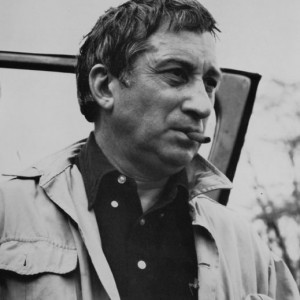 James Rosati was a sculptor whose monumental yet precisely crafted geometric works stand in the gardens and plazas of many art museums and corporate headquarters.

Born 1911, Washington, PA, Rosati moved to New York in 1944. Rosati was a violinist in his youth. By the 1950s, he was a charter member of the Eight Street Club and the New York School (They often drew inspiration from surrealism and the contemporary avante-garde art movements, in particular action painting, abstract expressionism, jazz,  improvisational theater,  experimental music, and the interaction of friends in the New York City art world).

Rosati met and became friends with painters Willem de Kooning and Franz Kline.  He taught at Pratt Institute, Cooper Union, Yale and Dartmouth. He received, among many recognitions, he was awarded the Frank G. Logan Art Institute Prize for sculpture in 1962 and a John Simon Guggenheim Fellowship in 1964. A 1969 show at Brandeis University lifted his career to new heights. He had other solo exhibitions and was in numerous group shows.

In his early art career, Rosati experimented with rounded marble sculptures and busts, but it was in the 1960’s that his distinctive style emerged -monumental works of strong Cubist influence that often strikingly combined geometric forms of aluminum and steel. A close friend of the sculptor David Smith, to whose work his own sculptures have often been compared, Rosati also made smaller, welded-steel sculptures that playfully abstracted from such forms as antique iron farm tools, the human form and even potted plants.

Rosati is perhaps best known for his sculptures in stone from the 1960s, and the stainless steel Ideogram that stood over 23 feet tall on the plaza between Towers 1 and 2 of the World Trade Center in New York City. More than 40 monumental pieces of sculpture are located in the United States and around the world. In 1969, Hilton Kramer wrote in The New York Times: ”He is a superlative craftsman, trained in the patient methods of the old sculpture, and is possessed of a very keen, elegant, intelligent sensibility, at once very poetic and very analytical.” 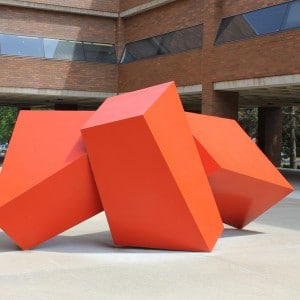