Gary Stewart Hume is an English artist, who ives and works in London and upstate New York, USA. His work is strongly identified with the YBA [Young British Artists] artists who came to prominence in the early-1990s. Hume is renowned for paintings distinguished by a bright palette, reduced imagery and flat areas of seductive color. While Hume’s paintings have always emphasized their luscious surfaces and simplified forms. Hume first received critical acclaim with a body of minimal and abstract works. Their high gloss paint and insistent reflective surfaces, developed in the early 1990s into a broader set of motifs, such as the nude, the portrait, the garden, as well as a pictorial idiom drawn from childhood, with images of polar bears, snowmen, rabbits, owls and close-up faces. His subject matter broadened yet more through the mid 1990s to incorporate images from popular culture, making portraits of celebrity figures. 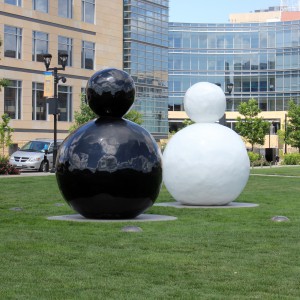