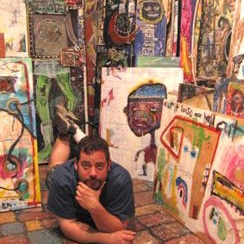 Frank Hansen studied (1987-92) at Grand View University in Des Moines, Iowa, and earned a Bachelors of Arts degree in fine and commercial art.

Hansen grew up on a farm and that background has influenced his work. His work includes clothing and furniture designs as well as interactive pieces and video art. He has exhibited at Moberg Gallery in Des Moines, IA.

“Young Frank cut wood, bailed hay, fed cows, dipped slime, had a tumor, and dreamt big on a small farm near Des Moines. His childhood formed his artistic vision early. The rusty old junk he was surrounded by made him realize that art didn’t have to be pretty, and maybe the best wasn’t. He took that approach to college and eventually created his own style of art he calls ‘Emotionalism.’ Any subject or image could be used; as long as it was done well and he felt passionately about it. Using childhood memories, world topics, inside jokes and absurd imagery mixed with unorthodox mediums just felt fight; especially when they are all used together.” 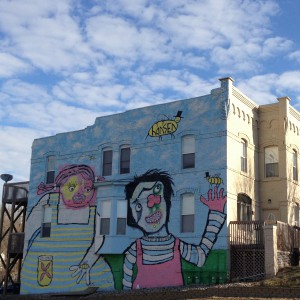