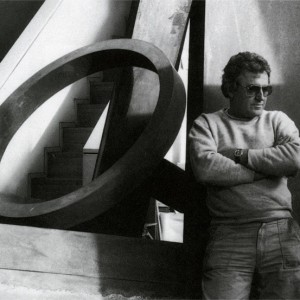 Fletcher Benton was born February 25, 1931 in Columbus, Ohio. He is an American sculptor and painter from San Francisco, California. Benton is widely known for his kinetic art as well as his large-scale steel abstract geometric sculptures.

Benton was a part of the Beatnik movement in San Francisco during the 1950s and 1960s working as a sign painter by day and an expressionist artist (painting) by night. In 1961, he had a solo exhibition at the California Palace Legion of Honor, showing his portraits of fellow artists like David Simpson and William Morehouse. Frustrated with the limitations of paint on canvas, Benton began to work with movement in geometric pattern pieces and boxes which he was familiar with from his work in commercial signs. This was at the beginning of the kinetic movement; Benton worked largely in isolation, unaware of other efforts of kinetic artists. His early works of this series were exhibited at Gump’s Gallery in San Francisco.

In the late 1970s, he abandoned kinetic art, switching to a more traditional media for sculpture: bronze and steel.[5] These works are designed to be viewed from all angles and have often been characterized as new constructivism; he continues to work in this style today.

Some of his most popular series in this style are the Folded Square Alphabets and Numericals, Folded Circle, Donuts, and Steel Watercolors. 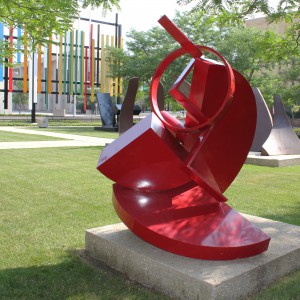