The grandson of Finnish immigrant builders, Eldred was raised in Minnesota. Eldred moved to Kansas City in 1959, fresh out of the University of Michigan. Within a year, he was named chairman of the sculpture department of Kansas City Art Institute.Eldred possessed an imposing physical presence and was a college football fullback. He was known to be resilient in the face of challenge, such as the fire in 1991 that destroyed a studio that contained his library and many valuable artworks.Eldred chaired the sculpture department at KCAI for 33 years, exerting a powerful influence on thousands of students, including: Shawn Brixey, Ming Fay, Michael Rees, John E. Buck, and the collaborative couple, (the late) Kate Ericson and Mel Ziegler who met at KCAI. He also was the artistic director of Biosphere II, and was a fellow at the Massachusetts Institute of Technology Center for Advanced Visual Studies.An artist best known for sculptures that blended natural and laser light, Dale Eldred was a victim of the “500-year” flood in the summer of 1993, when the Missouri River inundated parts of Kansas City.

He died in a fall trying to rescue equipment in his West Bottoms-neighborhood studio.He received numerous awards and honors, including a Guggenheim Fellowship and grants from the Ford Foundation, the American Institute of Architects and the National Endowment of the Arts. 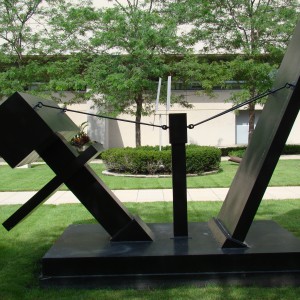