Marcheschi studied (1968-1970) at the California College of Arts in Oakland, CA, where he earned a MFA in sculpture. He also studied (1966-1968) at California State College, Hayward, CA, and (1963-1966) at College of San Mateo, San Mateo, CA. His art has been featured in over 130 solo art exhibitions throughout the world. He has about 50 public sculptures throughout the United States. He is based out of San Francisco and has been involved in the Fine Arts and Music scene since the 1970s. He has taught sculpture, critical studies and art history at the University of California at Berkley, the San Francisco Art Institute and the Minneapolis College of Art, Minnesota. An author and co-author of several books, he has also collected and studied Art Deco and Art American and European Art pottery for more than 35 years.

From a 2015 exhibition called Silence, First: Light-Art by Cork Marcheschi, the Daum Museum of Contemporary Art in Sedalia, MO, reported that Marcheschi’s earliest (beginning in 1966) experiments with light-art were “direct explorations of the intersection of art and electricity. [He] combined his passion for avant-garde electronic music with an interest in the work of the 19th Century inventor Nikola Tesla. Marcheschi’s early pieces reveal the workings of electricity in its most raw form as he [left] exposed an elementary arrangements of wires, transformers, and fittings that create pulsating light environments. …Marcheschi’s was not the clean ascetic minimalism of Dan Flavin, where the appreciable physics of electricity is subordinate to an aesthetic concern for transforming space. However, like Flavin, Marcheschi employed commercially available fluorescent light fixtures. …Marcheschi directly involved the viewer’s participation in activating his light sculptures…” Such as having the viewer step on a foot pedal to release energy from a 15,000 volt transformer,that sent arcs of electric current jumping across suspended wires. Such spectacular elements contribute to a sense of performance.  Often Marcheschi’s light-art is an art that acts: a staged experience—silence, first; fluorescence; silence again.” 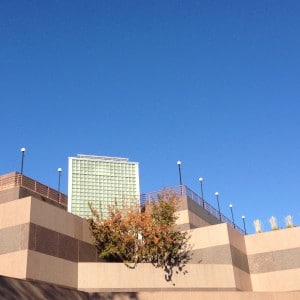