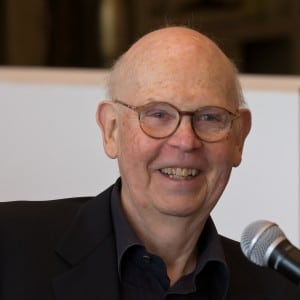 Claes Oldenburg is an American sculptor of Swedish origin, best known for his public art installations typically featuring oversized version of everyday objects. He was born in Stockholm, the son of Gösta Oldenburg and his wife Sigrid Elisabeth née Lindforss. His father was a Swedish diplomat stationed in New York and in 1936 was appointed Consul General of Sweden to Chicago where Oldenburg grew up, attending the Latin School of Chicago. He studied literature and art history at Yale University from 1946 to 1950, then returned to Chicago where he took classes at The School of the Art Institute of Chicago. In 1956, he moved to New York.

In the 1960s Oldenburg became associated with the Pop Art movement and created many performance art related productions called “happenings.” In 1965, he turned his attention to drawings and projects for imaginary outdoor monuments. From the early 1970s Oldenburg concentrated almost exclusively on public art commissions.