Chas Fagan is a self-taught artist based in North Carolina. A native of Ligonier, Pennsylvania, Fagan graduated from Yale University with a degree in Russian and East European Studies. While growing up in Brussels, he was artistically influenced by the works of great European masters. Fagan has gained national prominence and recognition as an accomplished and gifted portraitist, sculptor, and painter.

Since 2001, Fagan has received several commissions for statues designed specifically for the National Cathedral, in Washington D.C. In 2003, he completed a bas-relief sculpted portrait bust of President Reagan, commissioned for the U.S.S. Reagan. Fagan designed and created the Bush Monument (2005) for the city of Houston. His sculpture of a “young Neil Armstrong” was unveiled at Purdue University, in front of a new engineering building named in Armstrong’s honor. In 2007, he was commissioned by the Union League Club of New York to create a Lincoln bust.

In 2009, Fagan completed a seven-foot bronze sculpture of President Ronald Reagan, which stands in the Rotunda of the United States Capitol in Washington, D.C. In addition to the portrait of Dr. Norman Borlaug, the artist has created representations of Secretary Don Evans and former U.S. Attorney General and Pennsylvania Governor Dick Thornburgh. Other high-profile commissions, include the official White House Portrait of First Lady, Barbara Bush, and the portrait of Speaker Thomas Foley, which hangs in the nation’s Capitol. Fagan has worked with C-SPAN to create art works for several projects, including individual portraits of U.S. presidents for an touring exhibition. His solo exhibitions of his works have been hosted by Shain Gallery in Charlotte, NC; Metropolitan Gallery in Washington, DC; and Somerville Manning Gallery in Greenville, DE. 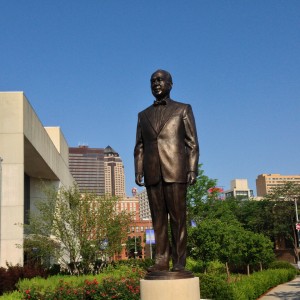