Niehaus was a native of Cincinnati, born of german immigrant parents. He worked as a carver of wood and stone and pursued studies first at the McMicken School of Design and then, beginning in 1877, at Munich’s Royal Academy of Fine Arts, where he remained for over three years. The effect of the German study was that he retained much of the Neo-Classical flavor in his art while most other sculptors of his generation were drawn towards Beaux-Arts realism.

He visited art collections in Italy, France and England and, after executing a few portrait busts in Manchester, returned to Cincinnati in 1881. There he received several commissions, including portraits of James A. Garfield. Many of his portraits are found in the Uniter States Capitol. Among them are statutes of Garfield, Henry Clay, John J. Ingalls and Oliver P. Morton. 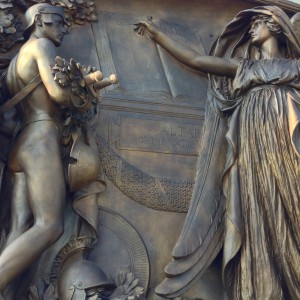