Carl Milles, original name Wilhelm Carl Emil Andersson (born June 23, 1875, Lagga, near Uppsala, Sweden—died September 19, 1955, Lidingö), was a sculptor known for his expressive and rhythmical large-scale fountains. He was one of Rodin’s assistants in Paris, was well-traveled and influenced by many sources, and he became an American citizen in 1945. His works can be found all over the world.  Many can be seen in Millesgåden, a wonderful outdoor museum in Lindigö, one of the northern islands in Stockholm.

Milles worked in clay (for casting into bronze) and in stone and wood. His best-known works are monumental fountains that combine elements of spacious design, subtle water effects, and inventive figure types (such as the fusion of classical triton or faun with Nordic goblin or troll). He created his first major fountain, Europa (1926), for the city of Halmstad, Sweden. His other notable fountains include Orpheus Fountain in Stockholm (1936) and Meeting of the Waters in St. Louis, Missouri (1940).

In 1931 Milles became head of the sculpture department at Cranbrook Academy of Art in Bloomfield Hills, Michigan. Milles’s works were collected at Cranbrook, his home for 20 years, and at the Milles villa, now a museum, in Lidingö, near Stockholm. His Fountain of the Muses, or Aganippe Fountain (completed 1955), was installed in the Metropolitan Museum of Art in New York City shortly after his death; it was moved to Brookgreen Gardens in South Carolina in 1982. 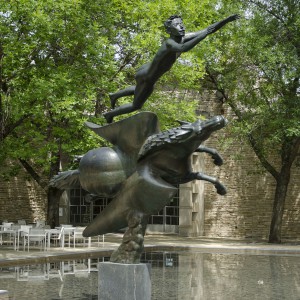