Barry Flanagan was a Welsh sculptor, best known for his bronze statues of exuberant, loose-limbed hares. These works injected an unusual formal whimsy and subversive irreverence into the often staid convention of bronze figurative sculpture. Flanagan was born in Prestatyn, in North Wales near Liverpool, where his father worked for Warner Brothers.

He studied architecture and then sculpture at Birmingham College of Art, and attended St. Martin’s School of Art in London. Art Critic Roberta Smith wrote that he began sculpturing hares in the late 1970s, “working from a dead one bought from a butcher, partly because there wasn’t much else to buy that day and partly because of a vivid memory he had of watching a hare leap across a field in Sussex.

He capitalized on the animal’s elastic, elongated form, implicit humor, libidinousness and sometimes demonic energy. He showed it stretched horizontally at a full bound, or raised on its hind legs like a human, leaping around and sometimes dancing or boxing with other hares.” Flanagan’s bronze hares have been exhibited in many outdoor spaces, most notably on Park Avenue in New York in 1995–96 and in Chicago’s Grant Park in 1996.

In 1999, he had a solo exhibition in Brussels followed by an exhibition at the Tate Gallery, Liverpool (2000). In 2002, a major exhibition of his work was shown at the Kunsthalle Recklinghausen, Germany, and toured to the Musee d’Art Moderne et d’Art Contemporain, Nice, France. 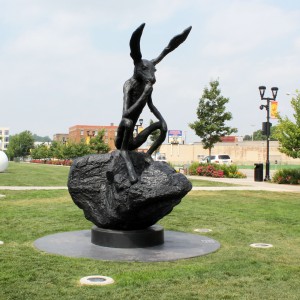