Alice Aycock has been a major international artist for decades, beginning in the 1970s, when she began installing her sculptures throughout the United States and abroad. In addition to her sculpture in Des Moines, Aycock’s works are also found at other airports (such as Kansas City and Philadelphia), including two of the nation’s busiest: JFK in New York and Dulles in Washington DC. Among her many well known installations is Paper Chase (2014), a series of seven sculptures that raced along several blocks of New York’s Park Avenue. Her work is in the collections of major museums such as the Museum of Modern Art in New York, the National Gallery in Washington DC, and the Los Angeles County Museum of Art.

Born in Harrisburg, Pennsylvania, Aycock was interested in movement from an early age, especially as expressed in her own body by dancing. “The very beginning of my creative consciousness was the immediacy of dance,” she has explained.[1] The twirling motions of dance and its leaps through space are among our earliest childhood sensations of exhilaration and of altering our perception of the world, and Aycock has translated those recollections into works of art. Later on, she developed a fascination with science and technology, especially where those reveal nature both inside and out.

She graduated from Douglass College in New Brunswick, NJ before receiving her Masters at Hunter College in New York in 1971. Her earliest works were part of the Land Art style in which artists use the landscape itself and the forces that shape it as their medium. Soon, she began to focus on art that expressed motion, with a tone of spontaneity and lightness, but which was usually fabricated from highly industrialized, precisely engineered steel or synthetic materials. Her aerial, twisting shapes were anchored to the ground or a firm base, but they reached toward the sky in a way that evoked the forces within nature that develop and then decay.

Aycock taught at the Yale University School of Art (1988-1992) and is currently on the faculty at the School of the Visual Arts in New York. In addition to her numerous commissions for major sculptural installations, Aycock also exhibits the drawings and similar plans for these projects. 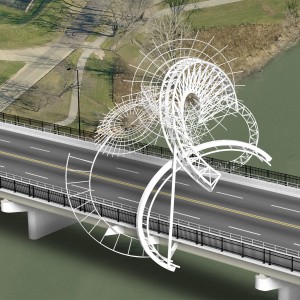 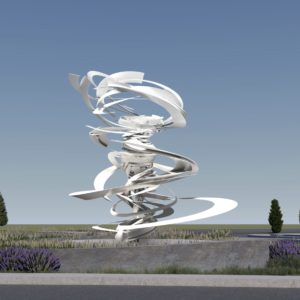