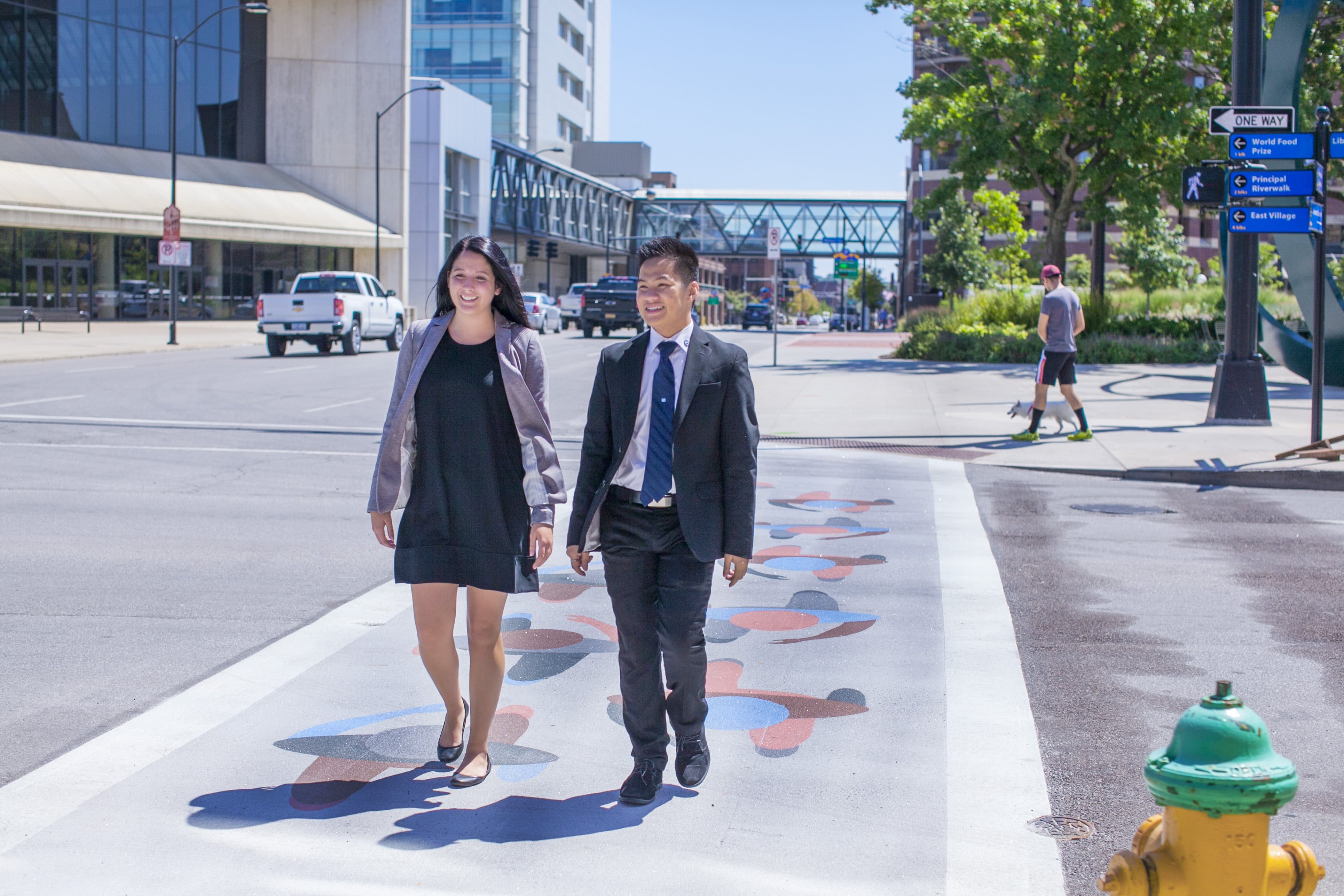 Greater Des Moines, Iowa: Installations are taking place on the regional Art Route DSM in Greater Des Moines (DSM), with locations in Downtown Des Moines and West Des Moines. Installations of thermoplastic paint in multiple crosswalks of intersections on the Art Route DSM path in Downtown are taking place this week and throughout the month. The completion of this project will make it the first known trail of its kind in the nation: a trail connecting public art that includes a painted connector path and artist-designed crosswalks.

Art Route DSM in Downtown Des Moines leads residents and visitors to more than 80 public artworks via a 6-mile trail. Art Route DSM is a collaborative project, led by a dedicated committee of volunteers through the Greater Des Moines Public Art Foundation.

Thermoplastic is a heavy duty, sustainable product intended to last a longer period of time than traditional road paint. Installation of the thermoplastic will primarily take place at night in Downtown.

About the Crosswalk Design

The crosswalks are designed by Roadsworth and commissioned by the Greater Des Moines Public Art Foundation. Roadsworth is an imaginative Canadian artist who began transforming the streets of Montreal into works of art in 2001. Motivated by a desire for more bike paths in the city and a questioning of “car culture” in general, he continued to develop a language around street markings and other elements of the urban landscape using a primarily stencil based technique. Since that time, Roadsworth has received commissions for his work and continues to be active in both visual art and music. In 2008, Alan Kohl made a film on his work, Roadsworth : Crossing the line, a production of the National Film Board of Canada. The CIAC has presented the works of Roadsworth in La Biennale de Montréal – BNL MTL 09.

Art Route DSM is a regional project launched in 2016 that unites 87 pieces of public art with a 6-mile-long path painted on Downtown Des Moines sidewalks and intersections, plus an additional art pocket in West Des Moines. Think, “Follow the Yellow Brick Road,” where vibrant-colored circles and chevrons lead to world-renowned sculpture, murals and architecture — free for all to enjoy.

Art Route DSM in Downtown Des Moines stretches from the State Capitol Building on the east to Meredith Corporation on the west. Bright colored circles painted on the sidewalks connect the route and Downtown intersections are designed by Roadsworth. Public art along the route are free for all to enjoy. Click here to see a map of Art Route DSM in Downtown or download the Greater Des Moines Public Art Foundation’s app directing users to public art on the Downtown route.

Additionally, Art Route DSM is extending regionally as West Des Moines plans to install an Art Route Pocket by the end of September. The route will connect 13 works of art that are part of West Des Moines’ annual Art on the Campus temporary exhibit located around the City Campus pond near City Hall. The route also connects to one of the five sculptures that make up the West Des Moines Public Arts Advisory Commission’s first permanent commissioned work of art, Art on the Trail “Surrounds,” installed in 2015. The 1-mile route will include brightly-colored circles and one crosswalk located at the intersection of S. 35th Street and Mills Civic Parkway. Click here to see a map of the Art Route Pocket in West Des Moines.