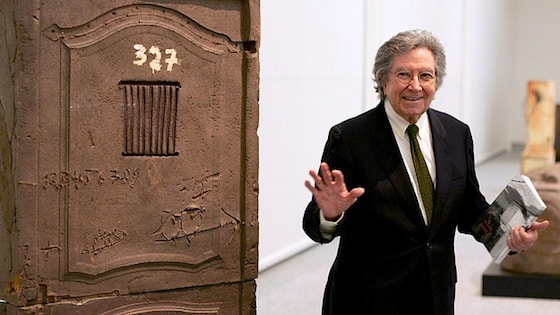 Tàpies (pronounced TAH-pee-ess) once said, “My first works of 1945 already had something of the graffiti of the streets and a whole world of protest — repressed, clandestine, but full of life — a life which was also found on the walls of my country.”

Born in Barcelona, Tàpies came to prominence in the late 1940s with richly symbolic paintings strongly influenced by Surrealist painters like Miro and Klee, a style he abandoned by the mid-1950s as he turned to what became his signature work: the heavily built-up surfaces that were often scratched, pitted and gouged and incised with letters, numbers and signs.

Tàpies was one of Spain’s main exponents of abstract and avant-garde art in the second half of the 20th century. His father was a lawyer and Catalan nationalist who served briefly with the Republican government. At 17, Tapies suffered a near-fatal heart attack caused by tuberculosis. He spent two years as a convalescent in the mountains, reading widely and pursuing an interest in art that had already expressed itself when he was in his early teens. Before devoting himself to being an artist beginning from 1943, he studied law for three years.

“He was the most radically Catalan artist in his thinking, his expression and references and at the same time the most universal in his language and international projection,” Catalan regional president Artur Mas said.

After studying in Paris, where he met Pablo Picasso, a fellow Catalan, Tapies began exhibiting regularly and, after the Surrealist adventures of his “magic period,” he set about transforming himself into a painter who, as the critic Roland Penrose put it in his monograph “Tàpies” (1978), “a painter who was to create mysteries in matter itself.”

This Domènech i Montaner building — the first in the city to be built on an iron frame —houses the experimental work of Antoni Tàpies, as well as exhibitions by other contemporary artists. The building is crowned with coiled wire, a curious Tàpies sculpture titled Núvol i Cadira (Cloud and Chair).

You Just Dream -- They’ll Figure Out How To Do It!
Tracing the Path with Echelman’s Public Art