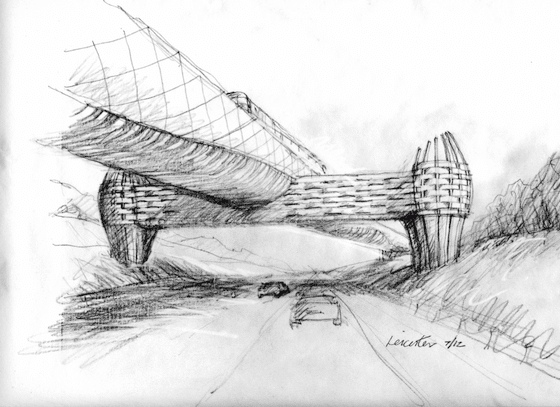 Metro Gold Line Foothill Extension Construction Authority officials knew early on that they wanted the bridge to do more than provide a pathway for light-rail trains to pass over I-210. They also wanted a work of art that would serve as a gateway to the San Gabriel Valley.

“We had the idea of turning the bridge into a sculpture,” says Habib Balian, the construction authority’s chief executive officer. “We didn’t want what I call ‘plant-on art,’ where an artist creates something to stick on the wall. We wanted the art to be in the form of design. The baskets that you now see from the end caps of the bridge — those are part of the structure that’s holding up the bridge.”

The Construction Authority, with the involvement of award-winning public artist Andrew Leicester, envisioned the Gold Line Bridge as a vivid expression
of the community, past and present. This pioneering collaboration resulted in the creation of a sculptural bridge built for the same cost originally estimated for a more conventional structure of its size.

“The bridge evokes the great infrastructure designs of the 1930s Works Progress AdminisTraTion and signals a neW era of artist involvement in major Public initiatives of our time,” said Barbara Goldstein, former editor and publisher of Arts and Architecture.

Andrew Leicester is a public artist born and educated in England who immigrated to the U.S. in 1970. He currently resides in Minneapolis, MN.