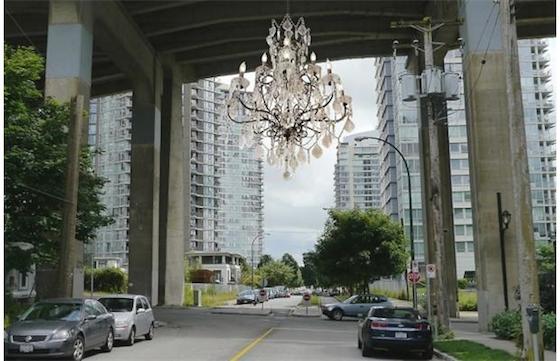 The underbelly of a major Vancouver bridge is going to be transformed with a jaw-dropping piece of public art: a massive chandelier, made of polymer and LED lights, that will actually spin. he public art project was approved by Vancouver’s Public Art Committee and announced by developer Westbank Projects Corp.

“Hanging in the cathedral-like space of the bridge’s northern viaduct, directly over Beach Avenue, the chandelier is conceived to slowly rotate as it ascends,” explained a press release from Westbank. “Then, once a day at a fixed time, it will release and spin rapidly, descending back to its starting point, coming to rest halfway to the road below.”

Rodney Graham was born in Abbotsford, British Columbia, Canada in 1949. His work draws on literature, philosophy, music, cinema, and art history to conjure uncanny manifestations of culture through visual quotation and disguise. Graham studied at the University of British Columbia and under Ian Wallace at Simon Fraser University in Vancouver. His work has been the focus of many international solo exhibitions, at institutions such as Museum der Moderne (Salzburg, 2011), Museu d’Art Contemporani de Barcelona (2010), and the Galerie Nationale du Jeu de Paume (Paris, 2009). Graham is also a practicing musician; he lives and works in Vancouver.