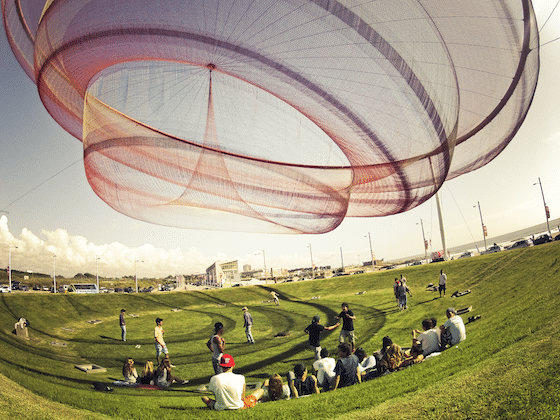 The artist Janet Echelman said, “For my sculpture She Changes in Porto, Portugal, I was originally prohibited from going over the street due to regulations, but my vision for the work required it to “float” above the roundabout. I decided to show both versions — what I envisioned, and one according to the rules. Turns out my images were compelling enough for them to obtain a variance.”

“When developing an idea, I remind myself not to start with compromise. I envision the ideal manifestation of the idea, as if I had no limits in resources, materials, or permission. I’ve learned there’s a cost to eliminating options too soon, as some might be more viable than they initially appear,” commented Echelman. Learn more from Janet Echelman’s TEDTalk “Taking Imagination Seriously,” she shared the hurdles she had to overcome to bring her translucent sculptures to the scale of buildings, and her dream to bring them to the larger scale of the city.