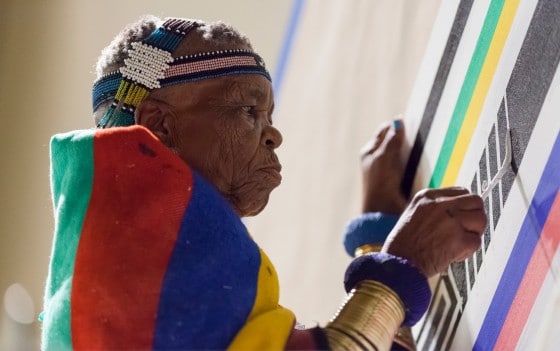 Mahlangu has built an international reputation for her boldly colored geometric patterns and intricate black and white borders, designs linked to the traditional beadwork that adorns Ndebele clothing and jewelry. The museum commissioned the murals to frame the entrance of the wing that holds its African Art collection. Ndebele women paint these designs on the exteriors of their home, so hanging them in Evans Court, at the entrance to its collection, is a fitting nod to Ndebele heritage.

Esther Mahlangu is a colourful, artistic painter, born in 1935 in Middelburg, Mpumalanga, South Africa and belongs to the South Ndebele people.

The term Ndebele refers to several ethnic groups in Zimbabwe and western popular in the province of Transvaal in South Africa. The division of the AmaNdebele nation dates from the early sixteenth century when there were a series of internal feuds among the tribes that led to the current division of three groups, now regarded as the Ndebele nation: the Matabele nation of Zimbabwe, the Transvaal and Northern Transvaal Ndembele, and the Southern Ndembele in South Africa.

Mahlangu is one of the few African artists whose art is often exhibited on the international scene. Her works are in major private collections including that of The Contemporary African Art Collection of Jean Pigozzi and in many Western museums. The art of Esther Mahlangu highlights the tension between local and global, between the anchor and detachment. Mahalangu directs a school which teaches young girls not only painting but also the technique of painting designs on particular compositions of beads. The tradition is not a static entity. As the work of the same Mahlangu suggests, “tradition” is a mobile field, future-oriented and ready to incorporate diverse stimuli. In fact, although South Africa is now one of the African States which is able to facilitate and promote the work of their artists both nationally and internationally with the likes of the biennial event in Johannesburg, the work of Esther Mahlangu is even more courageous because she was born and grew up in political and social turmoil.

When asked what Esther Mahlangu hopes her viewers gain from looking at her paintings, the artist responds simply with a smile: “Happiness.”