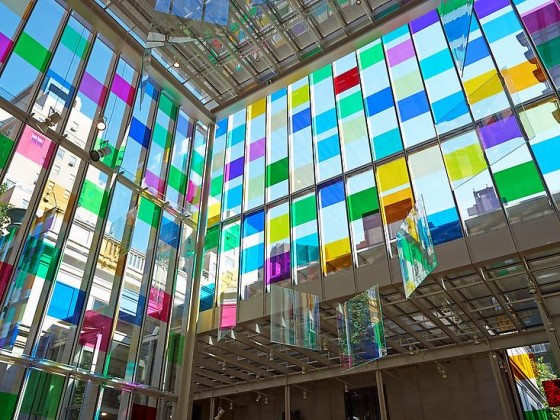 Among the sunniest public artworks on view now through August 23, 2015 in New York is American artist Spencer Finch’s (b. 1962) “A Certain Slant of Light” at the Morgan Library & Museum.

There’s a certain Slant of light
Winter Afternoons—
That oppresses, like the Heft
Of Cathedral Tunes—

So goes the first stanza of “There’s a certain Slant of light,” Emily Dickinson’s doleful poem which addresses light as a suspect entity—a presence weighing down on those who observe its behavior. The light Dickinson describes, or some quality of it, now fills the Morgan Library and Museum’s cavernous Gilbert Court where artist Spencer Finch has created a site-specific installation named for Dickinson’s poem and further inspired by the Morgan’s collection of medieval Books of Hours.

For this immersive installation, Finch covered many of the glass panes of the museum’s airy four-story atrium with rectangular sheets of translucent colored film. Suspended high overhead in the middle of the space is a set of clear glass squares, each freely turning in response to ambient air currents. As they turn, they reflect the sunlight filtered through the colored films, creating a crystalline, prismatic play of colors.