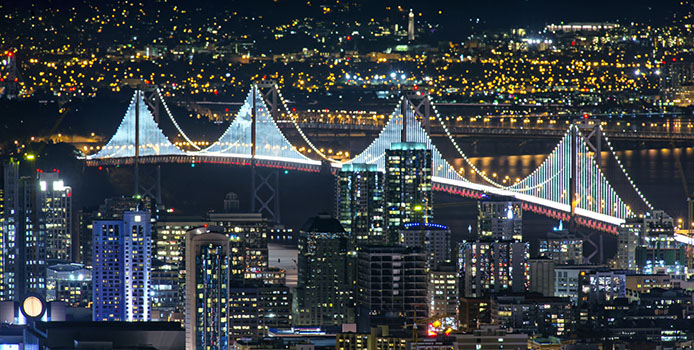 How is a historic bridge transformed into a dazzling work of art?

Forbes called this public art project, “a powerful example of what’s possible when you dream (very) big, and can successfully inspire engagement among all key stakeholders.”

In 2013, Leo Villareal installed more than 25,000 LED lights on the Bay Bridge. The installation was meant to be temporary, but will return permanently on 30 January 2016 as part of the Super Bowl 50 celebrations.

In California, an independently produced documentary about on Leo Villareal’s Bay Lights installation is now streaming on YouTube through February 20, 2016. Courtesy of  California’s KQED, you can watch it now here:  Impossible Light, by filmmaker Jeremy Ambers, profiles the men and women who made The Bay Lights project possible.

Starting with the insane idea of lighting up the workaday, utilitarian Bay Bridge, the film follows the journey of overcoming three hurdles in realizing this installation: getting it permitted, getting it funded, getting it built.

Enter artist Leo Villareal, a man whose extensive work with LED lights and encoded computer programming made him the perfect choice. The lighting project used approximately 4.5 miles of cable and 25,000 LEDs with extraordinary algorithms and patterns.

How did the artist and team deal with Homeland Security? How about the environmental impact? What were the best tie-ons for thousands of tiny lights?